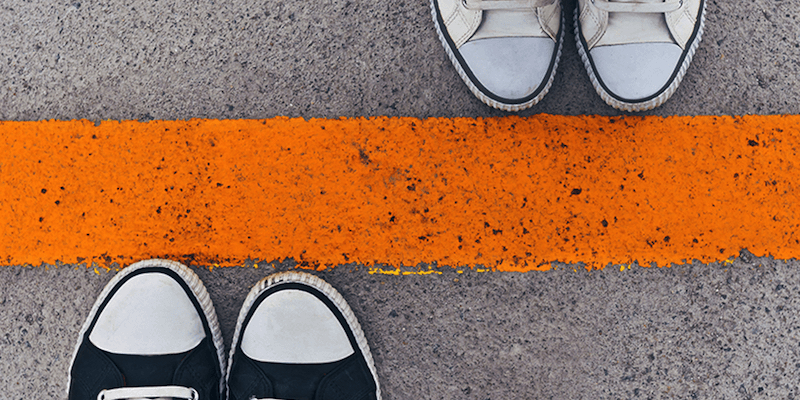 I trained as a teacher. It was a one-year course, which meant you had to cram a lot in, being sent on teaching practice once a term to gain some experience in front of the children. We read up on all the theories of education but struggled with the transfer into practice, so we rarely knew success in spite of what we told ourselves at the time. It all seems terribly amateur now. Intellectually many of my fellow students were in sympathy with what they were reading, but all they managed to do in class was to reproduce the models of parenting and teaching that they themselves had endured. Some of us attempted to break with the past and, throwing caution to the winds, plunged in with the flimsiest of practical ideas designed to liberate the child: for that was the mantra of the day.

To think that single-handedly my generation sowed the seeds of current national failure as we junked all the old certainties in favour of free expression. Our greatest failures were in numeracy (who remembers Cuisenaire rods now?), and literacy (good old Initial Teaching Alphabet), which, when one looks back now, all seem to be techniques designed somehow to throw the children off the scent, many of whom have grown up since unable to count or read. There was however one glimmer in that distant past which was a sign, had I only been able to read it. Several of us were training to be lower-school teachers, a task which seemed to those in the upper schools to be never-ending, multi-disciplinary and stuck in front of the same children all day. It called on a lot of personal reserves and there was nowhere to hide when it all went wrong, with hours still left until the end of the day.

My friend Sue considered herself to be a sensible person; perhaps too straight-laced for most of the others, having the perceived misfortune of a man of religion for a father, and so representing all those old certainties that my colleagues were blaming for the children’s current inabilities to be free. She was also a terrible teacher, crucially lacking a talent for it, never mind the wit to deal with the energetic enthusiasm of that age-group. One could also say reflecting on it now that she was not given any tools to deal with this either by her tutors. Her first teaching practice went badly, she being too stiff and formal and easily flustered, but she was bright, so for her second she took the brave step of junking all certainties in favour of a more free-flowing lesson format. But rather like the others, when she got in front of the children, she found herself reverting to type – a bit of a martinet actually.

I well remember that first evening when she came back to college and spent a lot of time with my close friends in a flurry of self-criticism. Our tutor had known the days of the Little Red Book, and encouraged us to indulge in this practice, seemingly a required passage for the cleansing of the overly intellectual in order to become more useful to the general population. We had little idea of how patronising that was at the time. Anyway, armed with a better view of herself after a night’s reflection, Sue marched into the classroom next day and set up shop. The children, as ever hugely generous in spite of the difficulties of the previous day, came in bright-eyed and bushy-tailed ready for action.

– Good morning miss, in that sing-songy way they have

– So… what shall we do today, children?

Of course the thing to consider here had been the Boundary. A child needs boundaries in order to feel safe, yet paradoxically also to test its own limits. This was before we were parents ourselves remember. Seeking to break out of the parent’s boundaries, is a familiar and frequent activity from an early age and a constructive one as the organism teaches itself adulthood. The adult will also set boundaries, but this time, to prevent being defined by others on their terms and therefore paradoxically to lose definition. In these circumstances it seems acceptable to resist having one’s boundaries set by others, but it is a whole different ball game for children.

The interaction between adult and child will form part of an imminent consideration, so let us maintain our focus on landscape. Following the sense of those meanings back to its roots, it would not be wrong to assert that in fine all ecosystems that may be individually identified on the planet are simply part of all ecosystems available and are indeed impossible to separate from each other. This is because their intrinsic permeability means that a precise boundary around an ecosystem can never be fixed effectively. In addition, it also seems to be in the nature of ecosystems that the larger a particular ecosystem is considered to be, the less interaction there will be between its different parts. This seems to mean that the bigger the ecosystem is the less it is an ecosystem. Ah, how futile are the circles in the sand of Precision.

For the Imprecise, as ever,it will be enough to retain from this episode its only useful idea: that even when the scientifically Comfortable set general definitions, systems continue to be porous and boundaries are blurred. This has important implications for us all, for we must not let ourselves become too distracted by the subtleties of meaning. We borrow the term “ecosystem” Imprecisely to provide us with a useful tool to help a deeper reading of our own landscape.

The concept of ecosystem in the natural environment has been fashionable for some time and the scientific community has spent a lot of time seeking to encompass the notion. As per usual with this kind of empirical enquiry, definitions of ecosystem have become more complex the more it has come to understand of its nature.

Scientists might start by stating that an ecosystem is an ecology of biological organisms living in a defined environment, but this would then have to be refined by breaking down the terms used in order to reflect the complexity. An ecosystem is about not only the relationships between residents but also the habitats and available resources in any given area, whose members benefit from each other’s participation via what can be termed symbiotic relations. Here one can introduce the notion of benefit, for the participants clearly must gain sufficiently from some form of symbiosis to want to remain in the area.

Thus we might end up with a fairly typical definition of an ecosystem such as this one: a “[c]ommunity of organisms interacting with one another and with the chemical and physical factors making up their environment[1]“. That is already a third attempt at definition and the search for Precision is somehow removing any useful meaning. This is not the first time that the natural entropy inherent in the desire for yet more Precision ends in sterility and inactivity. Only the Comfortable find it acceptable to draw lines around an ecosystem to isolate only those resources in a given ecosystem that meet their pre-requirements for Comfortable Precision. This lack of interactivity with the full reality of the ecosystem leads many to draw false conclusions about what is really happening there and thus limits the full range of possible actions.

To cut to the chase, what I think is useful for the Imprecise in all this is that, even when the comfortable scientist has pinned down general definitions, ecosystems still remain inherently leaky. At a minimum, energy and nutrients move in and out, but more likely individual organisms such as seeds, insects, and birds move in and out as well. Nor can these attempted definitions take into account that ecosystems talk to each other, for organisms in one ecosystem will naturally interact with organisms in another. The boundaries are fluid and this has important implications for me.

Currently “ecosystem” as defined by the ecologists seems to exclude this leakiness between ecosystems, meaning an area large or small which includes both pristine and highly developed resources. The word seems rarely if ever to be applied to what might be called disjunctive spaces. Two similar forests would ordinarily be considered to be two similar ecosystems rather than one, unless the space between them has been included. The word “biome” is now usually applied to visually similar but not necessarily connected areas, so do I really mean a biome? Chase this one as I may, these kinds of consideration take the notion of ecosystem beyond a point where it simply becomes too unwieldy a definition to be useful.

There is that useful fuzzy boundary saving me time and effort again. As usual I need not waste my time on the finer details of this dilemma. If I can seize the core of the idea in this way at the point where its natural reality assists me, I can make it my own and adopt for my own Imprecise purposes.

I have arrived at a point in my search for a definition of this phenomenon that implies that any statement built on the notion of separately definable ecosystems is ultimately a myth. This simple paradox pushes scientists into the only point of view they have left, which is that of participant observers so, reflecting upon all that the scientists are telling us, are we left with just one truth: the optimum size of an ecosystem is set by nothing more complex than the level of resources available to the observer? If so, that is a hugely liberating reality for the Imprecise person seeking to use ecosystem as a model for choosing which part of the landscape he or she wishes to focus upon at any one time because that means that a sure definition of ecosystem is mostly if not solely based on my personal convenience as an observer.

Now I can see that the size of my ecosystem is set by the area available for observing biological interactions, as determined by the resource limits set by the observer. Ecosystems are there and we determine their boundaries but the determinant impact of the observer means that it will be a mistake for me to think of ecosystems as stable environments whose components are necessarily native to that area. We know that the impact of human activity means that many ecosystems are threatened or destabilised by new introductions or changing physical factors, enough to put at risk the continued existence of some resident resources, be they animal, vegetable or mineral. A disaster in the natural world, this openness to external inputs can also be turned into another huge liberation for the Imprecise.