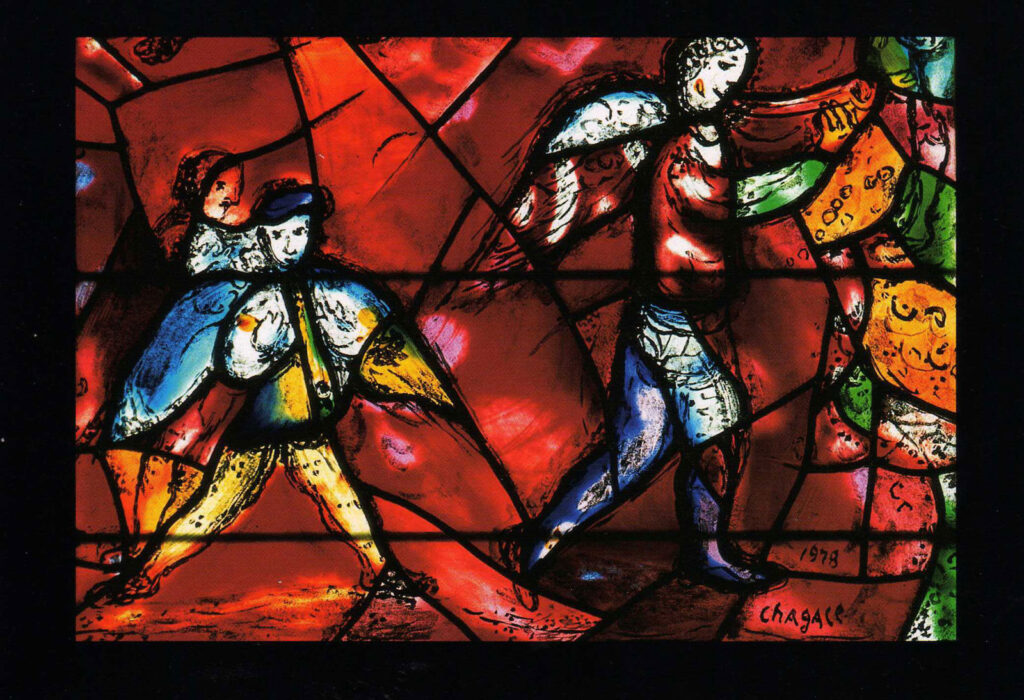 The extraordinary body of works of modern art and design commissioned and held by the Cathedral in Chichester since the latter half of the twentieth century now forms a group of exceptional interest and significance among English cathedrals, giving Chichester a leading position as a patron of late C20 creative work by artists of the first rank. In the following listings these artists are mentioned in bold and the Cathedral dignitary concerned is underlined.

The commissioning of works of art grew from the friendship of Bishop George Bell and the German artist Hans Feibusch, who among important works elsewhere (St Alban, Holborn and Bristol) carried out a number of commissions for churches in the Diocese.

His principle works were produced for the Cathedral itself:

The Baptism of Christ in 1951 to fill the blocked doorway on the South of the Cathedral Baptistry in the South West Tower;

and The Ascension for the Bishop’s private chapel (1953).

Belief in the value of modern art in the spiritual life of Chichester was then strengthened when Walter Hussey was appointed Dean in 1955, bringing with him a great deal of knowledge and commitment. Hussey encouraged an exceptionally significant tradition of commissioning, putting the Cathedral at the forefront of a movement of art in the service of worship.

Hussey commissioned major works of art, among the best known of which are:

Graham Sutherland – the painting Noli me tangere (1958) an altar piece for the Chapel of Mary Magdalen; with a Robert Potter altar, communion rail and candlesticks (date?);

Geoffrey Clarke and Robert Potter – the nave pulpit of concrete and aluminium (1966);

John Piper – (Title to come) the tapestry in seven panels to hang before the Sherburne reredos behind the high altar (1966);

Marc Chagall – The Arts to the Glory of God the window in the north of the Retroquire (1978), a design based on Psalm 150.

Also under Dean Hussey it is worth noting that Robert Potter was made Surveyor of the Fabric (1959-85).

Hussey died in 1977 after an extraordinary reign of 22 years. The influence of this exceptional C20 taste-maker extends beyond the Cathedral since his art collection was bequeathed to the City to form the basis of the Pallant Gallery Collection of British Modern Art, a collection of some international importance.

Patrick Proctor’s Baptism of Christ as a reredos in the Chapel of St John the Baptist (date?);

and the monumental statue in bronze of St Richard (2000) before the West front of the Cathedral;

The Icon of St Richard by Sergei Fyodorov (2003) marks the 750th anniversary of the saint’s death.

During the first half of the C20, repair work was carried out to bring more and more parts of the cathedral into use, viz. The Chapels of St Clement and St George (1921), Sts Edmund and Thomas (1923) and St John the Baptist (1924). External repairs were done from 1931 with the restoration of the South Transept gobelin in 1932.

In the immediate post-war period repairs were carried out in Clipsham stone to the flying buttresses on the north of the Presbytery following air raid damage. In the late 1940s the lead coverings on the high roofs were replaced with sheet copper.

Memorials: There are relatively few C20 memorials in the Cathedral, especially since the Second World War.

The last neo-gothic tomb to be installed was to Bishop Ridgeway in St Clements Chapel and dates from 1929 (artist?).

The Arundel Screen, removed in 1860, was restored to its original place in 1960 as a monument to Bishop Bell.

(Artist) The stone inset in the floor of the North Transept to commemorate Gustav Holst (date?)

Portraits of Cathedral dignitaries,  the Surveyor of Fabric (Robert Potter?) and the Archdeacon’s dog, in Medieval tradition, providing the models for the renewed heads of the corbel table and gargoyles.

From 1928, Bishop Bell’s friendship with Gustav Holst brought a leading composer to Chichester and contributed to a renewed tradition of choral singing before the 2nd World War.

Under Horace Howkins and John Birch, revival of the Southern Cathedrals Festival (dates?): Leonard Bernstein’s Chichester Psalms were performed in the 1965 edition.

Robert Potter and made by Louis Groseille – four copes (1967);

A yellow silk cope by Anne Blakeney and the Seffrid Guild;

Over the centuries, the Cathedral library has had a very chequered history and much has been lost.

In C20, Cecil Deedes, Canon Librarian was the greatest benefactor of the Cathedral library up until his death in 1921.

1947 saw a disastrous sale of books when rare and major works of particular relevance were disposed of at auction, apparently unbeknown to George Bell.

The poem The Arundel Tomb, inspired by the Fitzalan monument which had been moved from Lewes, was finished by Philip Larkin in 1956.

Under Francis Steer the library regained respect and acquired improved conditions sited over the Treasury (1978).

The Chancellor is now Canon Librarian and a 1502 French Book of Hours printed on vellum was bequeathed in 1993.

Further Reading: Click here for the legacy of other C20 buildings and public art in Chichester.