Where our hero measures the distance between parent and child

He hadn’t been thrown out of a Library in decades, if that was not his very first time even? All too embarrassing, not to say tedious. What he needed now was a Power Walk, and what greater challenge than a brisk climb up the hill that overlooked the town, the effort forcing lungfuls of fresh sea air into his frame.

He strode off with much purpose. The tarmac was hard and meeting the downhill traffic somehow unsettling. He was dismayed to discover that he was unable to maintain the pace, but fear spurred him on. These old cars had poor brakes, and only simple rack and pinion steering, so you never knew what might happen. And so few colours available too, introducing such a sadness into the landscape.

Meagre face wrapped in a headscarf, a woman with a battered pushchair came careering down the hill on his side of the road, the impossibly small offside wheel wobbling dangerously. The little girl was crying here eyes out, bless her, and the woman seemed rather harassed.

Missed their train? he wondered as he stepped gingerly aside and flattened himself against the chicken wire fence to allow them past. Well it was either that or suicide in the road. 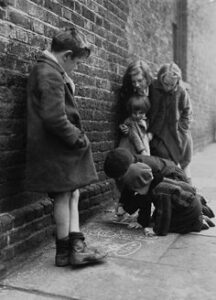 – If you don’t shut up, I’ll give you something to cry about! burst out the mother as they zoomed past and were gone.

He was stopped in his tracks. Such Violence against a Young Child and he had let it go by. He turned to look down at the hill after them, hoping there might still be time to interject.

But looking down over that sheer height immediately gave him vertigo. He felt his testicles retract in fear, as if he had already begun to fall and grabbed at the chicken wire, the rusty fence painful in his fingers. He was surprised to see nothing there, just a void. How could this be, what had he expected to see? He ran the expected movie in his head: the rear of a harassed mother in a red scarf disappearing from view, holding back her baby as the pushchair tried to escape her grasp; the old cars roaring past in a faint blue haze; endless rows of Victorian houses in patchwork streets still following the course of water or an old track down from the heights along the edge of a field; and a Sea whose horizon was lost below a white blinding sky that turned and screamed above his head like the seagulls. The vista remained obstinately empty where there should at least have been a landscape.

He shook his head and blinked, willing the view to return to normal. He turned back to look up the hill. All was normal. A row of shops, the pre-war cars still coming round the bend, a few pedestrians. He had now reached a point where the gradient eased off and stopped to look back again, this time the view restored.

He was high up on a hill overlooking the Town. No sign of the pushchair but the rest reassuringly familiar.

He wondered what the mother might have retorted to any intervention on his part.

– Who do you think you are, interfering? This is my baby and I’ll do as I wish. You try raising a child on your own with no money. Look after the child yourself of you’re that good at it, thrusting the bundle into his hands, all arms and legs and a snotty nose?

How would he have coped? His mind raced through the options.

Here I am stranded in Brighton, where could I have put it? Would you go to a police station?

Should I take it home with me, give it a second chance, raise it myself? But you can’t go round stealing babies.

Suddenly wary, for into his mind had floated phrases from Matthew 4: “Again the devil taketh him up into an exceeding high mountain and sheweth him all the kingdoms of the world, and the glory of them; and saith unto him, All these things will I give thee, if thou wilt fall down and worship me.”

Ha, of course. Delusions of Grandeur.

He had no aspiration to be Jesus but was someone or something taking him on this tour to prove a point? It had become clear that there were choices to be made somewhere along the line, yet had he been presented with Temptation? And what Kingdom was he being presented with, and should he accept?

He looked around. The sky here was brimful of seagulls and starlings, those other avian success stories; but no magpies.