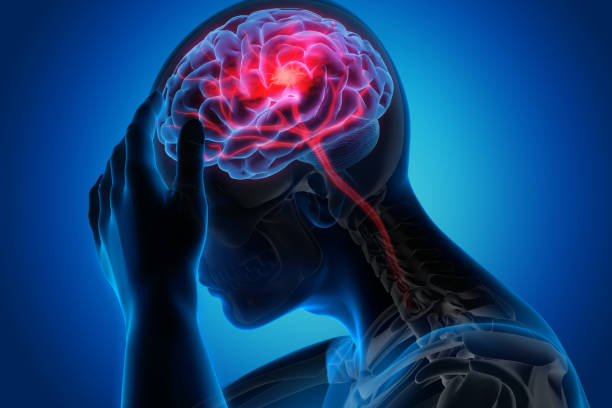 The interpretation of encephalisation is difficult as brains are costly to produce and expensive to run. The human brain, in waking or sleeping, is very energy-demanding as the brain, at only 2% of body weight, accounts for 20% of energy expenditure. This compares with 9% in macaques or chimpanzees, and 3% for elephants.

Figures for the average brain size of modern humans tend to vary between sources, but a typical value is 1350 or 1400 cc (cubic centimetres). Gorillas have an average brain size of 500 cc, with large individuals going up to 700 cc, or even 752 cc in one reported (but unverifiable) instance.

Having a large brain must have produced an advantage or it would not have been selected for. There are several explanations:

Monkeys and humans appear to be selected for intelligence because the environment in which they lived – open grasslands – fostered the development of complex social groupings which required intelligence to cope with such living: co-operation, deception, representational understanding, communication (environment > social complexity > intelligence).

Byrne & Whitten (1998) argued that social living fosters the need for an individual to serve his own interest by interacting with others either co-operatively or manipulatively without disturbing the social cohesion of the group. They referred to this ability as ‘Machiavellian intelligence’.

According to Stanford (1999) a key element of group living is the ability to hunt cooperatively as a group, and then after the hunt there are many other social elements involved such as sharing, bartering etc. Stanford also points out that meat is highly valued (in human hunter-gatherer societies and in chimpanzee groups), partly because the possession of it allows the holder to gain political favours from males, and sexual favours from females – it is a social resource. The control of such a valuable resource confers power and status. In human foraging societies women prefer successful hunters as mating partners.

Foley & Lee (1991), and Gibons (1998) have argued that the change in cranial capacity during the course of hominid evolution required dietary and developmental strategies that would sustain the cost of a large brain. Milton (1993) discusses the behavioural and physiological adaptations concerned with plant-eating, fruit-eating and meat-eating diets.

The latter two diets require the development of mental skills such as memory for food locations and increased social co-operation for hunting and food sharing. The Australopithecines (judging by the size of their dentition) were herbivores and small brained. As the early hominids moved from plant eating to fruit and meat eating their teeth became smaller and the brains increased in size.

Comparative brain size is closely related to diet with leaf-eaters (folivores) having smaller brains with proportionally less neocortex in relation to body size than frugivores (fruit eaters). The guts of chimpanzees and gorillas are optimised for fruit eating and leaf eating respectively, the human gut is optimised for high energy diets (principally derived from eating meat).

Hibbeln (1998) pointed out that Palaeolithic nutrition was probably low in saturated fats and high in polyunsaturated fats (the reverse is true today). Therefore, our ancestors consumed more omega-3 fatty acids (arachidonic acid, docosahexaenoic acid) and these are the major determinants of synaptic membrane fluidity. Hibbeln proposed that the move from being vegetarian and scavenging for meat to eating fish (rich in these fatty acids) promoted the sudden burst in intellectual/technological/cultural achievement about 35,000 years ago. Prior to that our ancestors (who had larger brains) had achieved relatively little.

Schizophrenia is found in all known populations in all continents and has a similar prevalence and outcome in each. This indicates that genetic rather than environmental factors are the principal cause, but if this is so we must ask the question what adaptive function does schizophrenia serve?

Horrobin (1998) proposed that during the course of human evolution specific biochemical alterations led to changes in metabolism which enabled the human brain to expand in size and function more efficiently. He points out that a large brain per se does not automatically lead to creativity or intelligence as our ancestors did possess large brains, but for many millions of years showed no evidence of using them.

Around 35-50,000 years ago there was a sudden burst of intellectual and creative achievement leading to religion, war, art, transport, complex culture and an agricultural revolution. If brain size was not the principal factor, then Horrobin argues that connectivity was the key.

Neural connectivity is determined largely by the availability of phospholipids, which make up 60% of the brain, and in particular the connections between neurons are made by phospholipid-rich axons and dendrites. These rely on a supply of the essential fatty acids (arachidonic acid, and docosahexaenoic acid) and the essential amino acids, which are vital for cell-function and neuronal signalling and can only be obtained from a diet rich in animal protein (meat, fish, eggs).

Horrobin points out that the sudden rise in creativity paralleled dietary changes as hominids moved from eating vegetation and fruit, to eating meat and fish. While these changes led to improvements in brain function, they may also have had a side effect – schizophrenia. This disorder is typically seen in families who were distinguished in many other fields (art, leadership etc), families in which one member is schizophrenic clearly show other behaviours that are referred to as “schizotypal”:

Interestingly, schizophrenics have been found to have reduced levels of phospholipids: there is increased activity of the phospholipases which removes the fatty acids from membranes. Membrane activity is thus affected and neuronal conductivity suppressed.

This will not be a problem provided that the diet is rich in fatty acids (as it was during that part of our evolution when creativity and intelligence boomed). However, modern diets are severely lacking in the essential fatty acids and are replaced with saturated fatty acids, modern farming and agricultural techniques having contributed to this.

As these levels have dropped in modern society, the very behaviours that made us human are expressed in more extreme behaviours of schizophrenia and manic depression. Schizophrenia has certainly increased over the past few hundred years, it has a higher incidence in cultures with a high rate of dietary non-essential fatty acids, and is reduced in patients who increase their intake of essential fatty acids.

Early-human ancestors began to hunt and forage for food and this had a series of benefits:

There are several consequences of bipedalism:

Jerison, H.J. (1973). *Evolution of the Brain and Intelligence*. Academic Press.