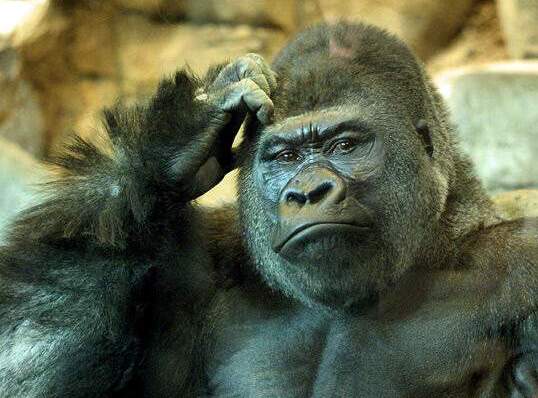 Compared with other primates, humans stand out in three main respects:

Compared with the average for simian primates, the human brain is 3x bigger than expected which represents a dramatic increase in just a few million years. Such a rate of increase in brain size is unique. It seems that bigger brains are better but why?

Large brains are expensive  – an adult human brain consumes 20% of the body’s energy and the imbalance is even greater in early life. The brain of a human newborn represents 10% of body weight and consumes about 60% of the baby’s energy

How do humans afford large brains? The remodelled jaw apparatus, bipedalism and large brain may all be intimately connected. Thus (as with all mammals) locomotion is crucial in food collection, teeth & jaws are crucial in food processing while the energy obtained from food meets the high running costs of a brain (which plays a key role in obtaining food and survival)

The evolution of the human brain can be explained at 2 levels:

Many similarities between primate and human mental abilities exist despite great differences in shape and size.

All primate brains have a distinct temporal lobe which is separated from the parietal and frontal regions by the Sylvian fissure. The temporal lobe includes the auditory areas (on the dorsal surface), some association visual areas (on the ventral surface) and some limbic structures (the amygdala & hippocampus on the medial surface) which are associated with emotion, attention and memory

The shift to a more upright posture in early primates led to a change in the foramen magnum.

The exit of the brainstem and the position of the face (including optic and olfactory nerves) have converged to form almost a right angle in primates. This pulls the cerebellum and brainstem beneath the cortex and draws the posterior end of the cortex beneath the frontal & parietal lobes to form the temporal lobe.

There is considerable variability in the surface of primate brains which arises from differences in the extent of folding of the cortex.

The average primate has a larger brain for its body size (at all stages of its lifespan) than most non-primate mammals. It is often assumed that the relatively larger brain of primates correlates with an increase in intelligence.

The superior visual and manual skills of monkeys could make them well adapted to life in the trees. Nearly complete convergence of the eyes and corresponding changes in the brain’s visual structures are common to all primates. Their depth perception is improved as the visual overlap of the visual fields means that most part of the visual fields are viewed from two perspectives at once.

Inputs to the brain from each eye are more evenly divided than in other mammals. This has produced striking changes in the superior colliculus an ancient visual area of the midbrain involved in orientation to visual stimuli. The parallel evolution of a high degree of visual convergence in owls, cats and some bats suggests that extensive visual overlap is particularly valuable to animals that navigate by sight by night.

The ancestors of all primates were almost certainly nocturnal, arboreal, insect-eating creatures as are many present-day prosimians. The retention of visual convergence in diurnal primates, even though it has disadvantages for predator defence, may reflect the difficulties in reversing this evolutionary change

Primates also have 3-colour vision unlike many other mammals – colour-blindedness of mammals is probably derived as it is common in birds, reptiles and fish.  It may reflect our ancestry as nocturnal predators. The secondary evolution of colour in monkeys and apes required specialisations of the retina and of the cerebral cortex. The rediscovery of colour vision in primate evolution probably occurred at the same time as activity moved towards the day and perhaps to accompany a shift to feeding on fruits that advertise ripeness by changing colour.

Many monkey species utilise bright colours for social communication. Primate visual cortices are the most complex visual processing system ever evolved. Nearly 50% of the cerebral cortex in macaques is directly involved in visual processing

The nasal cavity is reduced in primates because of convergence of the eyes. Although the olfactory organs are reduced in many primates the parts of the brain to which they connect have not become similarly diminished. The structures receiving smell information form part of the limbic system form part of the limbic system and are central in regulating emotional arousal.

The parts of the cortex and spinal tracts associated with touch and movement are particularly well developed in primates which correlates with primate specialisations such as hands for grasping and manipulation & the face for communicating by gestures. Although the muscles of the mouth and throat are well represented in the primate motor cortex the production of sounds is not under skilled motor control. Primate calls are similar to automatic and stereotypic human sounds such as laughter, sobbing and shrieks than to human speech.

The auditory system of primates is no more or less specialised than that of many other land-living mammals. In some species processing of different classes of sounds is specialised to opposite sides of the brain which parallels lateralisation of language processes in the human brain.

In absolute terms the human brain is smaller than that of an elephant or a whale but is capable of intricate mental processes that no other brain can approach. The average human brain weighs 1330g with those of men heavier than those of women only because of differences in body size. Human brain is 2% of body weight and receive up to 20% of metabolic energy at rest (16-20% of cardiac output).

Brain may contain 10,000 million neurones each of which makes 1,000 to 8,000 synapses with other neurones. The human brain must be unique in anatomy and function because it controls such human adaptations as symbolic communication, speech, tool production and “culture”.

Three unique features of the human brains are visibly obvious: its large size with respect to the body; the asymmetry between left and right hemispheres; and the reduction of its olfactory apparatus.

We know far more about the functional uniqueness of the human brain than its structural uniqueness. Theories to explain these extraordinary abilities include:

Australopithecine brain had a mean weight of 450g (assuming that 1cc of brain weighs 1g) which may or may not be a significant departure from the apes. Encephalisation probably first exceeded the ape range at least 2 million years ago with appearance of H. habilis. By 1.5 million years ago the brains of H. erectus weighed about 1000g.

Brain size continued to increase without a corresponding increase in body size until the appearance of H. sapiens about 400,000 years ago. During human evolution, the brain has increased in size with respect to the body, especially during the past 2 million years when the stature of early humans hardly changed.

© University of West England: from a lecture found at www.uwe.ac.uk